As Times Square is a popular location for tourists, it can be hard to shoot photos, particularly panoramas as people will often get in front of your lens, movement becomes blurred and when trying to stitch shots together, people often end up looking like they’ve got sliced in half. There are times when the square isn’t so full of tourists but as photographer David Clapp explains, the photos aren’t as interesting: “Even though shooting at busy times proved to be very complex and very stressful both in the field and in post-processing, I didn’t want to go out 5am when there was no one about as it ruins the buzz intensity.”

There are a set of steps which you can stand at the top of and shoot down onto the square, however if it rains no one sits on the steps, blocking the view and you’re not allowed to use a tripod at the top of the steps as you will be told it’s a ‘safety hazard’.

A way to shoot Times Square without having to fight the crowds is to shoot up at the tower blocks and billboards that decorate the square.

Here’s one David took looking vertically up at the tower blocks: 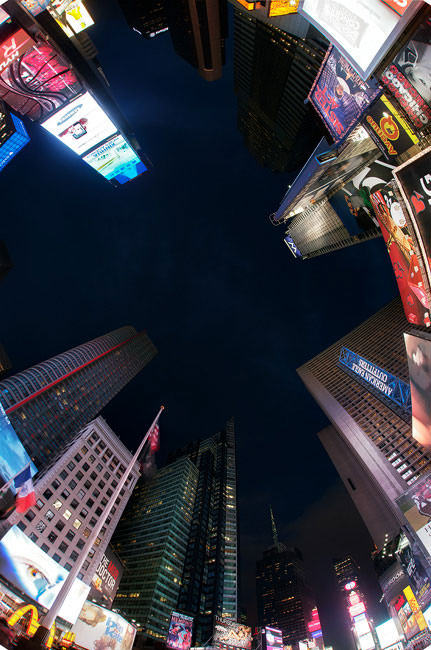 Moving your lens away from crowd level removes one problem but it’s replaced with another and that’s adverts changing constantly. If you want to blend images together, as David did for the above shot which is made up of three images, getting your timing right is crucial.

“The only way to do this is to shoot with the camera in Live View mode and wait until some kind of ‘rest’ occurs before capture. You can see I caught the ‘eye’ in the bottom left half way through transition. Still, it works. However, I am not altogether happy with the lighting of this image. The weather was so unstable that it made dusk shooting a lottery.”

A way to really exaggerate the size of the structures in a city is with a fisheye lens. In the shot below, David moved down a few streets away from Times Square to shoot these buildings at a crossroads. 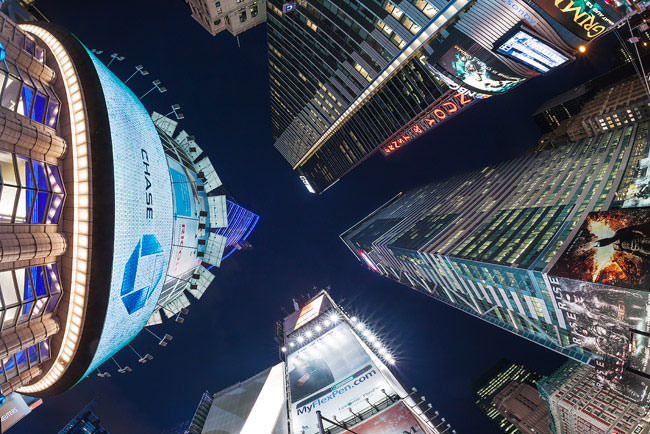 “I opted for the same technique I tried a few days before, using a faster shutter speed to capture two images for a blend, so the adverts wouldn’t change between images. It works really well, but in the end the ambient light was good enough that I could process the image from just one RAW file.”

For the next shot, David had to position half of his tripod on the pavement and the other on the road (watching for traffic in the process). 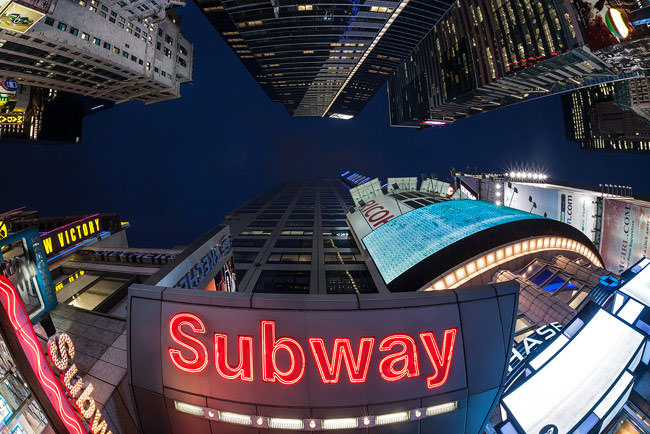 “This fabulous subway sign helps to set the scene even further, giving a title to the cluster of buildings rising upwards into the sky,” he explained.

David increased the brightness in the centre of the photo with a circular gradient fill on a curves adjustment layer. He did this to give the impression that the lighting was consistent all the way up to the top of the tower blocks, which it wasn’t.

This was shot following exactly the same concept but this time David twisted the camera and lens downwards, to show the full tower block above the road. 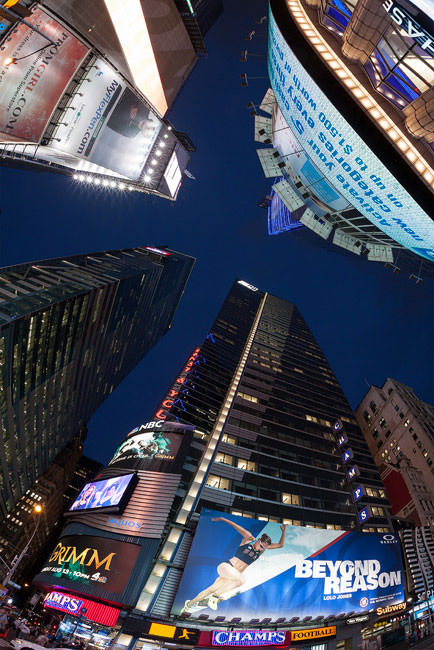 “These buildings are a riot of colours and lines. I love the cross-shaped gap in the middle, in particular,” said David. “The image potential in Times Square is huge, all these shots were taken from the same place, give or take a few feet, but it does take serious refining.”

To see more of David’s work, visit his website: www.davidclapp.co.uk