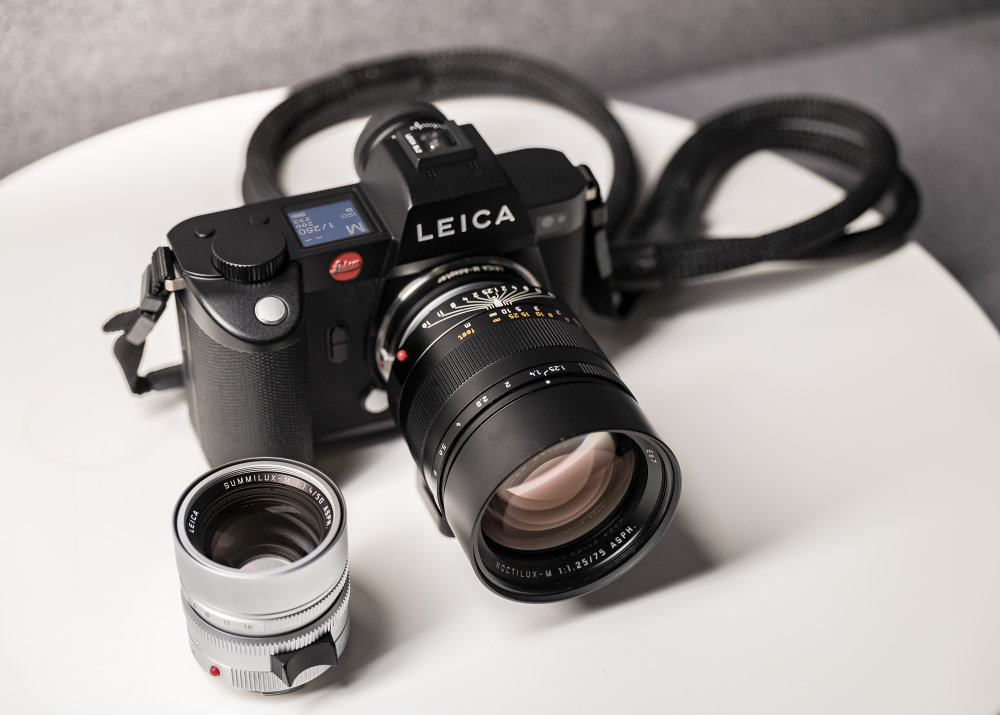 After waiting 4 years, Leica fans now have a new 47mp Leica SL2 full-frame mirrorless camera to get excited about and while paying homage to its history and lineage with the iconic Leica design, there are quite a few changes that show Leica is, very much, embracing the future of digital photography and videography. The Lecia SL2 is available for at £5,300 (excl. lenses but it does include a leather strap). 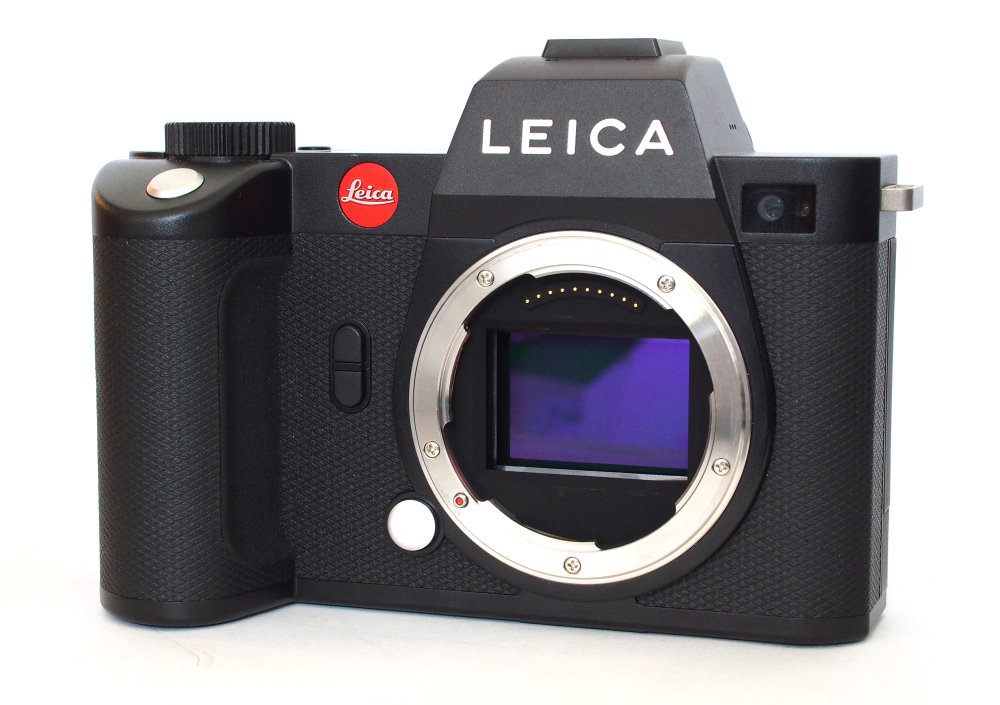 The Leica SL2 has a 47MP full-frame sensor which is a higher resolution than the 24MP sensor found in the Leica SL, an improved LCD monitor (3.2inch, 2.1m dots compared with 2.95inch, 1.04dots), better viewfinder (5.76m dots vs 4.4m dots), a new Maestro III processor and Smart AF. The unmistakable Leica design remains but the SL2 offers better ergonomics, a grip that’s more comfortable to hold and a simplified three-button control layout.

The Leica SL2 is part of the Leica L-Mount alliance and shares a lens mount with the Panasonic Lumix S series, as well as the Sigma fp, meaning you can find lenses from Leica, Panasonic, and Sigma available in L-mount, that will work perfectly with the Leica SL2.

The SL2 features a 47mp full-frame sensor, with sensor-shift image stabilisation, and this enables ultra-high-resolution 187mp multi-shot images to be taken.

The SL2 has P, A, S, M shooting modes, giving you full manual controls, and the camera records raw images as AdobeDNG files, so that you can open them in any program that supports AdobeDNG files, without having to wait for specific support for the SL2 camera. 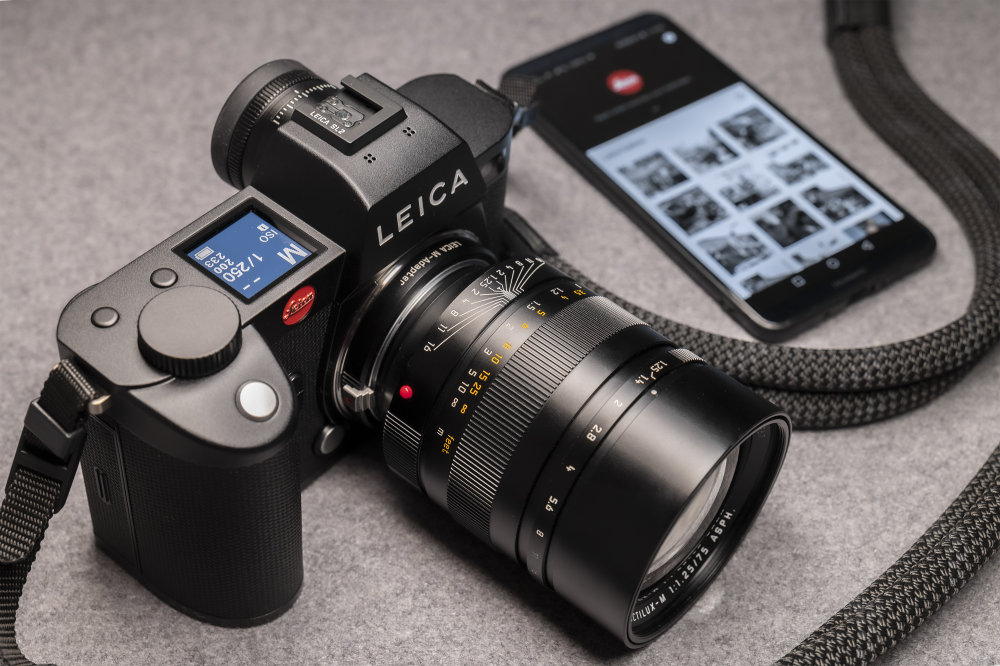 Two UHS-II-compatible SD card slots are built-in along with headphone and mic sockets which is something videographers will be particularly pleased to see as previously, you needed an adapter to connect these to the SL. There’s also a full-size HDMI connector for connecting external monitors, and when you need more power than the 1860mAh lithium-ion rechargeable battery can supply, an additional battery grip is available.

As for video formats, the SL2 can record up to 60 frames per second in Cine 4K mode and up to 180 frames per second in FullHD mode. Activating Cine mode transforms the SL2 into a manually controlled cine camera as ISO becomes ASA, the shutter speed is marked in degrees on the rotary disk shutter, and the f-stops indicating the aperture ratio are replaced by T-stops.

Image stabilisation is now built into the camera body and the SL2 features a suspended sensor which adjusts its position so it can compensate for camera shake, this is effective for both stills photography, as well as video recording, and works with any lens attached to the camera.

Smart AF (autofocus) is a new feature that switches between focus priority and shutter release priority, as is the Leica Object Detection AF which promises fast and reliable autofocus. The Auto Focus (AF) system also automatically detects whether a subject is stationary or in motion and, as a result, will switch between motion and focus priority. Plus, body/face recognition is built-in (previously, it was just face detection) with the option to toggle between multiple people in the frame and there’s an option to turn off noise reduction during long exposures.

Other features include an ISO range that tops out at ISO50,000, a new Maestro III processor and 10fps continuous shooting with the mechanical shutter, or 20fps using an electronic shutter.

The camera has built-in Wi-Fi, as well as low-power Bluetooth, letting the camera connect to Leica’s FOTOs app. This lets you remotely control the camera, as well as transfer images. 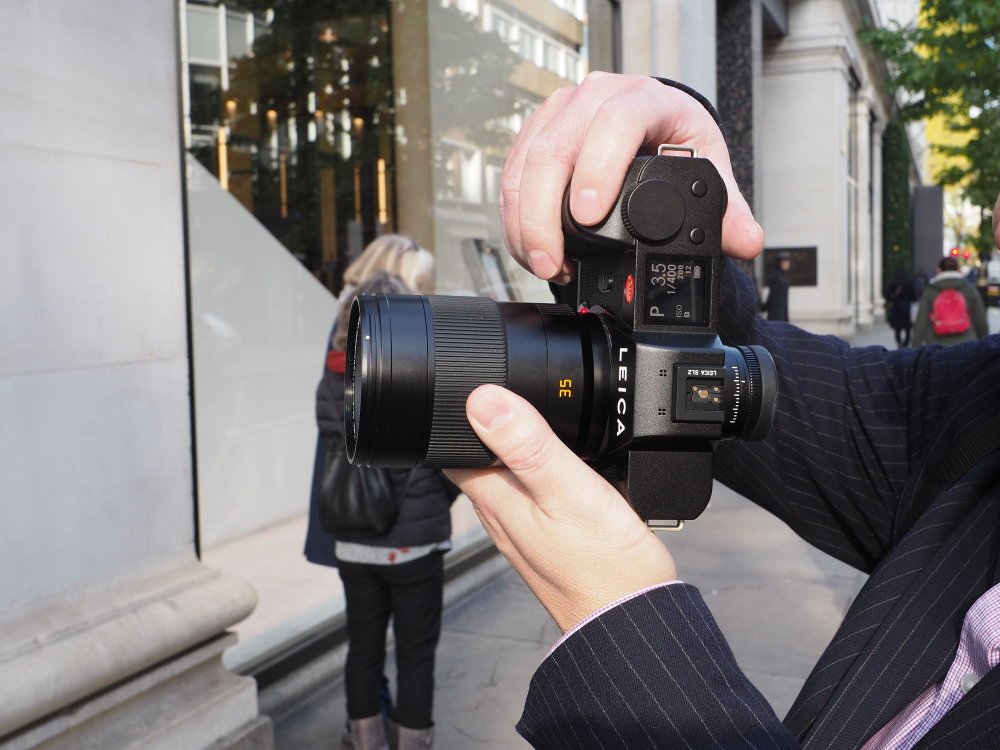 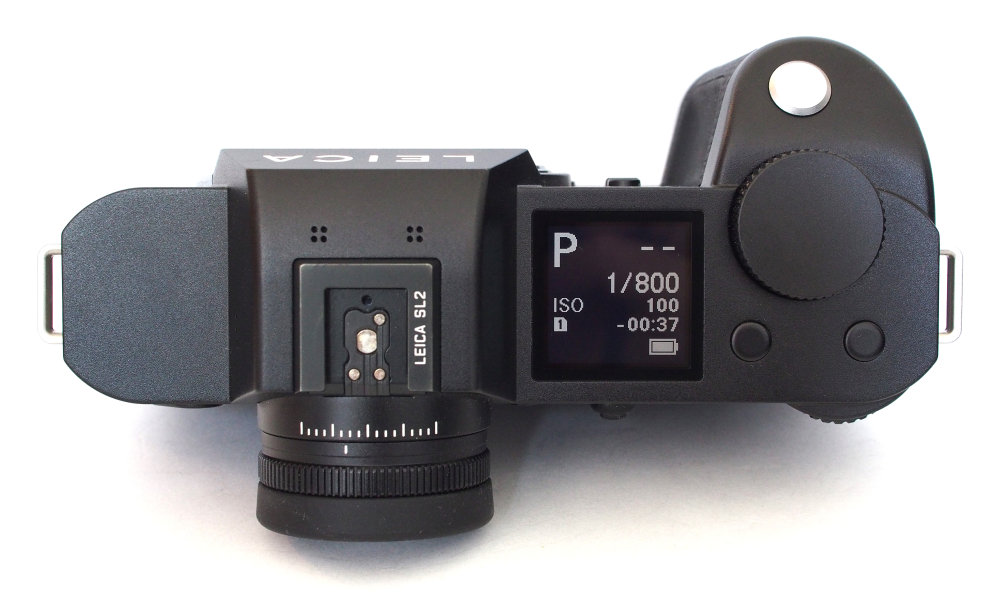 The Lecia SL2 has an all-metal construction (with aluminium and magnesium) so it feels solid in the hand and as with all Leica cameras, shouts ‘quality’. The grip has been improved, making the Leica SL2 even more comfortable to hold as it’s deeper and the leather wrap now extends across the front of the camera which will protect the camera body and make it grippier. Unlike some cameras that you want to put back around your neck on a strap, the Leica SL2 makes you want to hold it as the improved grip really is much more comfortable to hold and as a result, it makes the Leica very portable and much more tactile, although this will also depend on the size and weight of the lens used with the camera. The Leica SL2 is also weatherproof with an IP54 rating (the SL doesn’t have an IP rating but it is weather resistant).

“Overall, the design of the SL2 reflects the iconic Leica identity and traditional design elements that the brand has become known and loved for over the years.”

On the back is a larger, higher resolution touch-screen LCD monitor and to the left side are 3 additional buttons which are designed to simplify the control layout and they are ‘Play’, ‘Function’ and ‘Menu’. Previously, on the Leica SL, there were 4 rectangular unlabeled buttons so what was an intuitive control system should be even easier to use. As well as the buttons, there’s also a click wheel, joystick. Plus, when you view the menu system on the LCD screen, you’ll see that the options for stills/video are separate which is a nice touch and it does make you wonder why it’s not set up this way by others. The overall UI is well set out and how it responds to touch is on-par with a high-end smartphone.

There are some unlabelled buttons, with two on the top, one on the back, and two at the front, so it may take a little while to get used to these, however, with continued use, it’ll soon become easy to use. The rear command dial can also be pushed in and used as a button, and this brings up mode selection.

On the left (from the back) you’ll find a headphone and microphone socket, as well as a full-size HDMI connection. Under this is a USB Type-C connection letting you charge the battery, and power the camera while you use it.

There are 225 AF metering zones, however, on spot focus point selection, you can select from 625 different points on the screen, with the focus point selectable right into the far corners of the frame. There are multiple AF options including multi, spot, field, zone, tracking, and face/body detection. When face/body detection AF is active, if there is more than one subject in the scene you can easily switch between them using the joystick. 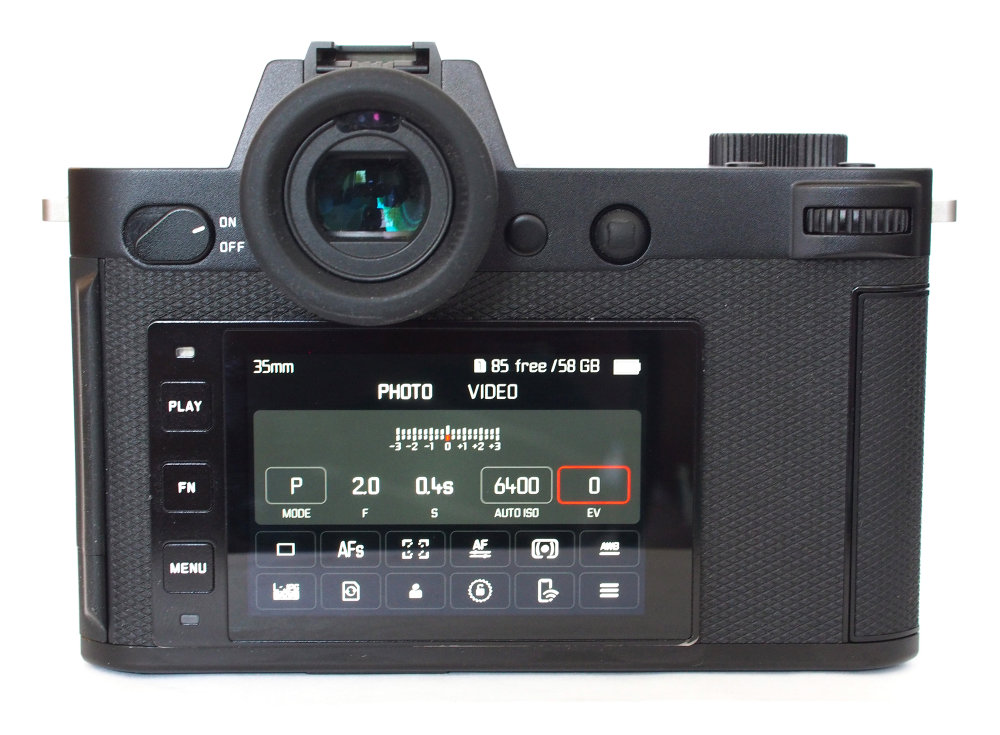 Turn your attention to the top of the camera and you’ll notice it hasn’t changed that much when you compare it with the Leica SL as there are still the main dial and a small LCD screen, that shows camera settings, to the right.

The camera’s electronic viewfinder now has a resolution of 5.76million dot (the SL had 4.4m dot) so what was an already impressive electronic viewfinder has got even better. It’s large, too, offers 0.78x magnification and is comfortable when you have your eye held up to it. There is a built-in eye-detection sensor to automatically switch between the EVF and rear screen and the EVF has a refresh rate that can be set between 60-120fps.

The screen gives a clear view of your scene (apart from the top and bottom bars), and as a touch-screen can be used to change settings and options. Viewing angles are very good, although, as you can see, the screen can’t be tilted in any direction. The top and bottom bars can be switched off for composing your shots, but as you focus or pre-focus your shot, the bottom bar re-appears blocking your view of the scene.

Pressing the menu button brings up the screen shown above, giving you quick access to the most commonly used options. Press menu again and you enter the main menu system. In the main menu system, you’ll need to use the joystick to scroll through the options, as the touch-screen is not active. The menus are quite clearly laid out, although a little bit of added colour coding wouldn’t go amiss.

If you compare the Leica SL2 with other full-frame mirrorless cameras, it is quite big as it shares similar measurements as the Leica SL but it is lighter. Having said that, the redesigned grip does make it really easy to hold and carry around in just one hand so perhaps the slightly larger body won’t be too much of an issue. Something to be aware of though, as it does weigh approx. 923g with battery and memory card. 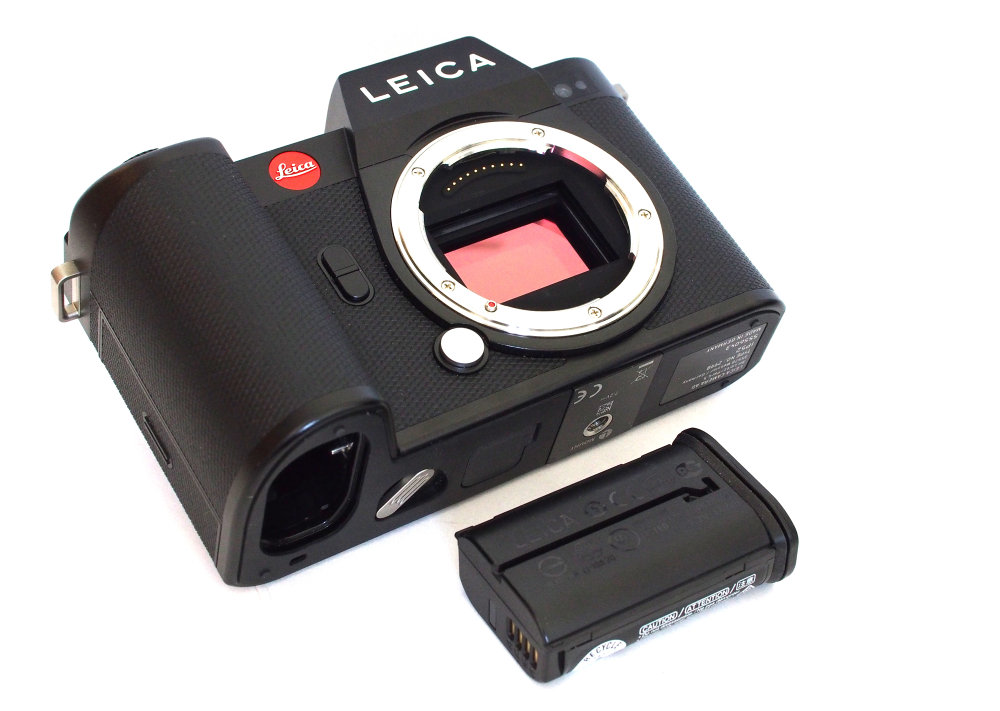 Battery life – Battery life is rated at 370 shots according to Leica / CIPA test results, using the LCD screen, which means you’ll most likely want to invest in a spare battery. However, if you do find yourself running low on power, then you can connect a USB charger.