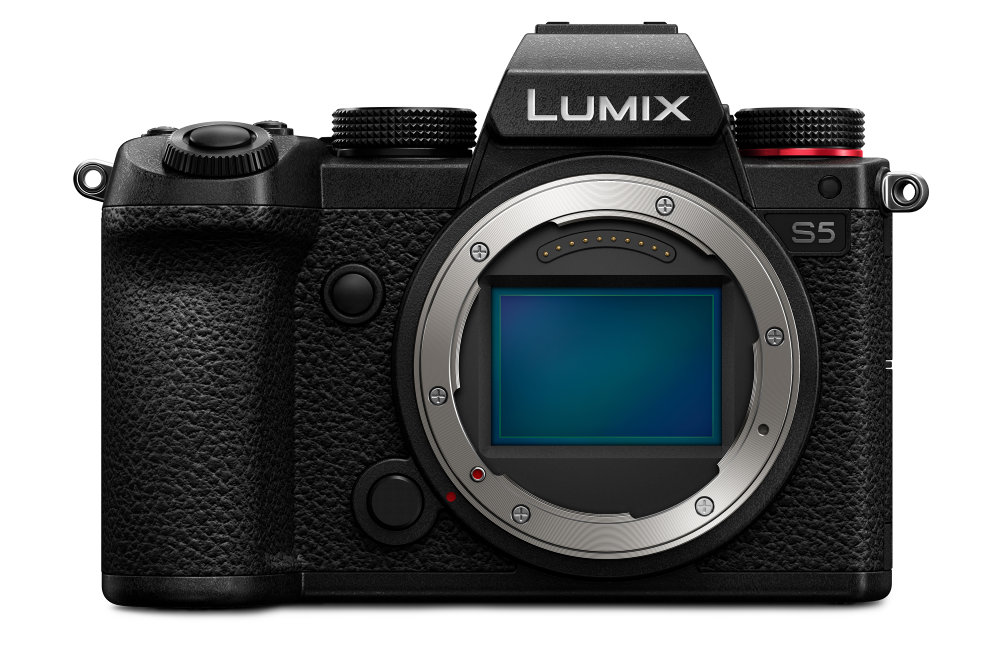 The camera comes with a new battery that gives up to 470 shots using the EVF, or up to 1500 shots with power save mode switched on. An optional battery grip is available, extending this to 940 / 3000 shots.

A future firmware update is planned to enhance video recording to add 4K CINE recording, plus support for higher resolutions. 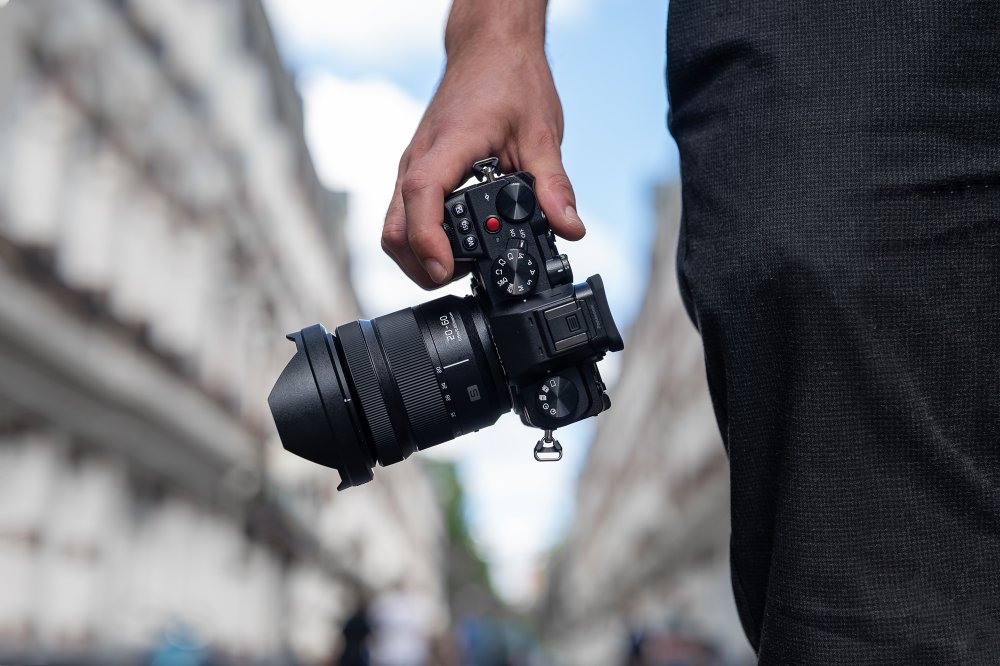 Panasonic is delighted to announce the LUMIX S5, a new hybrid full-frame mirrorless camera that achieves excellent performance in both video and photo as well as exceptional flexibility for serious videographers and photographers.

At the heart of the camera, the LUMIX S5 contains a 24.2-megapixel 35mm full-frame CMOS sensor that boasts wide dynamic range and high sensitivity performance. The LUMIX S5 further realises a maximum ISO 51200 of crystal-clear high sensitivity video with the adoption of the Dual Native ISO technology.

The LUMIX S5 is the smallest and lightest S Series camera to date, measuring only 132.6 x 97.1 x 81.9 mm (approx) and with a body-only weight of 630g (excluding battery/memory). This makes the S5 incredibly portable and easy to use for extended handheld shooting. 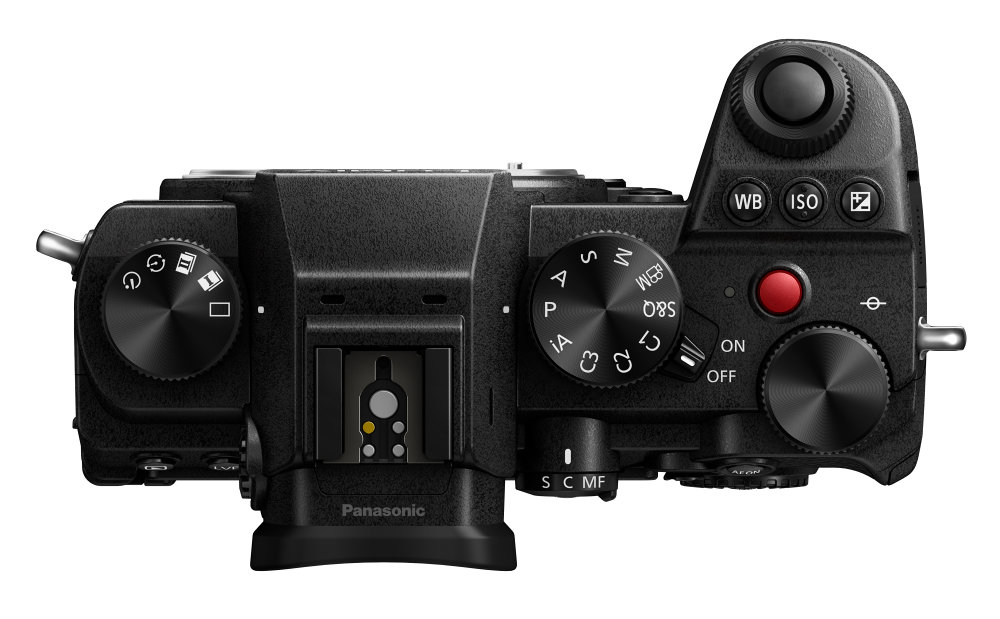 The LUMIX S5 provides 14+ stops of dynamic range, which is as wide as cinema cameras, and V-Log / V-Gamut compatibility with popular VariCam colour science. A variety of recording formats and modes including 4:3 Anamorphic mode, Slow & Quick Motion, 4K/60p interval shooting and 4K HDR are also provided.

The LUMIX S5 also possesses improved high-speed, high-precision AF in both photo shooting and video recording that has been made possible with advanced deep-learning technology featuring real-time detection of the subject such as human eye, face, head and body recognition.

The LUMIX S Series full-frame mirrorless camera system adopts the L-Mount system to provide users with a diverse and future-proof range of products from Panasonic, Leica Camera and Sigma. Panasonic now offers four innovative models in the LUMIX S Series of full-frame mirrorless cameras – the S1, the S1H, the S1R, and the new S5. The LUMIX S1 is an advanced hybrid camera for high-quality photos and videos, the LUMIX S1H is designed and developed specifically for film production, and the LUMIX S1R is ideal for taking high-resolution pictures. The LUMIX S5 packs the essence of these S Series cameras in a more compact, lightweight body. With this line-up, Panasonic is committed to meeting the demands of all creators by challenging the constant evolution of photo/video culture in today’s new digital era.

*2 Of mirrorless interchangeable lens cameras, as of 2 September, 2020. 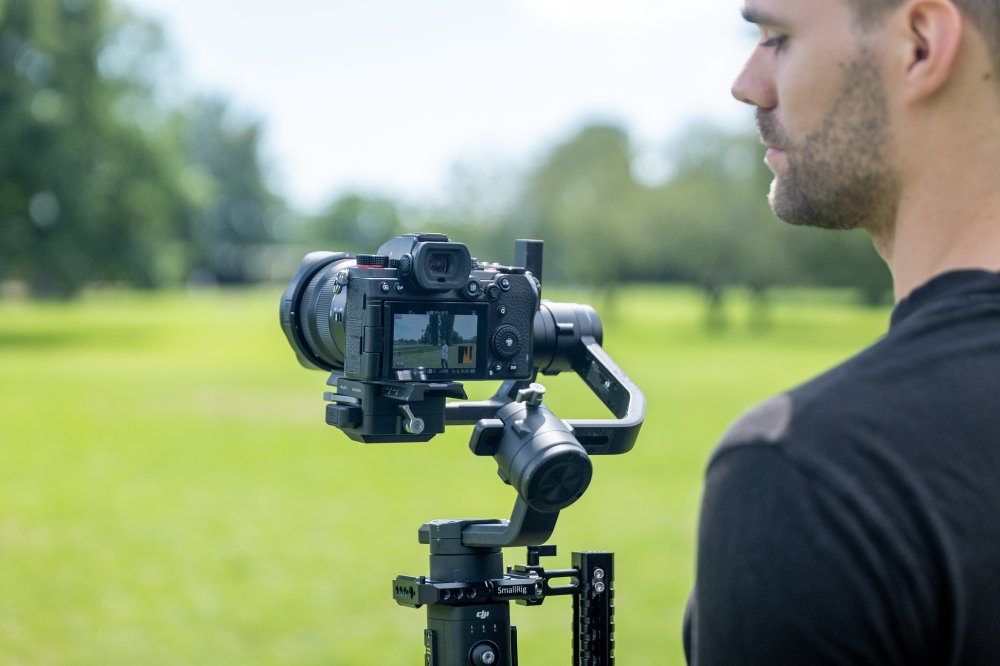 To further enhance its performance, a firmware update is scheduled for the LUMIX S5 by the end of 2020. In addition to C4K video recording, the update will support RAW video data output to ATOMOS NINJA V over HDMI at a resolution of 5.9K (5888×3312) 29.97p/25p, 4K(4128×2176) 59.94p/50p and Anamorphic 3.5K (3536×2656)/50p. A variety of video recording assist functions such as the Vector Scope Display, Master Pedestal Adjustment and SS/Gain Operation(SEC/ISO, ANGLE/ISO, SEC/dB) will also be available. L.MonochromeS and L.ClassicNeo are the new options to be added for Photo Style.

The LUMIX S5 delivers 14+ stops of dynamic range, virtually the same as those of the Panasonic cinema cameras, to precisely reproduce everything from dark to bright areas. The ability to capture accurate colours and skin tones is a must for any filmmaker. The LUMIX S5 imports the renowned colour science of Panasonic’s VariCam line-up of cinema cameras, as well as V-Log / V-Gamut.

V-Log renders a very flat image while maintaining all of the colour information, meaning there is more room to play when the images are in post-production. The CMOS sensor of the LUMIX S5 achieves a wide colour gamut known as V-Gamut, which is the S5’s optimum colour space that is wider than BT.2020. V-Log has log curve characteristics that are reminiscent of negative film and V-Gamut delivers a colour space even larger than film. 35 conversion LUTs for VariCam cinema cameras can be downloaded free of charge for use in the LUMIX S5. It is easy to match the colour tone with the footage recorded in V-Log of S1H/S1 and V-Log L of GH5/GH5S. Practical tools like a Waveform Monitor and V-Log View Assist are also available. 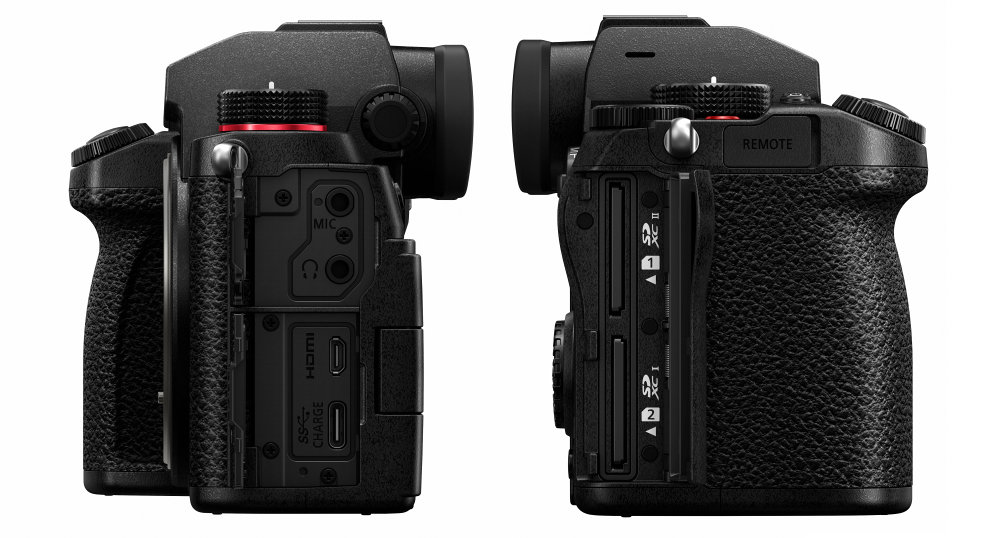 The HDR (High Dynamic Range) video recording in 4K is also available, which realistically reproduces both light and dark parts of an image. The camera records video with a designated gamma curve compatible with ITU-R BT.2100, and the user can now choose Hybrid Log Gamma (HLG) in Photo Style. The HLG*2 Photo mode provides a wider dynamic range to reproduce light and shadow with more natural contrast. The HLG Photos can also be produced as an HSP file*3 with compressed high-brightness signals in its full resolution (5,888 x 3,312, in 16:9) in addition to JPEG/RAW files. The user can playback these vibrant images on the latest Panasonic HLG-compliant 4KTV via HDMI cable connection or other HLG-compliant devices.

In continuous burst shooting, 6K PHOTO*4 makes it possible to capture unmissable moments at 30 fps by extracting the frame with the best timing out of a 6K burst file (in 4:3 or 3:2 aspect ratio) to save as an approximate 18-megapixel equivalent high-resolution photo. 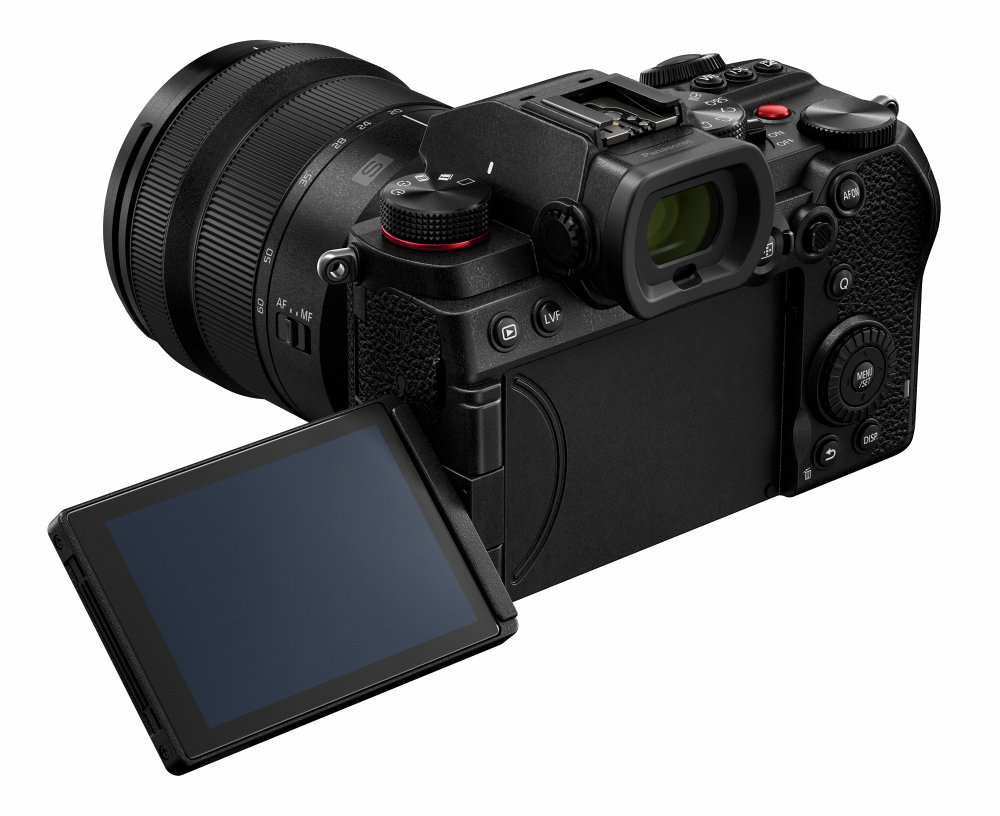 The LUMIX S5 boasts a wide dynamic range and reproduces sharp images with exceptional clarity. Noise is minimised even when shooting at maximum ISO 51200 high sensitivity, making it an ideal camera to use in low-light situations.

Taking full advantage of its high-resolution sensor, the LUMIX S5 provides a High-Resolution mode that faithfully reproduces precise details to be saved as beautiful, highly realistic images not only in RAW but also in JPEG. Eight consecutive images are automatically shot while shifting the sensor using the Body I.S. (Image Stabiliser) mechanism and synthesised into a 96-megapixel equivalent (12,000 x 8,000-pixel) image by the Venus Engine, which boasts high-speed signal processing. This magnificently high-resolution photo is ideal for landscape photography of stationary subjects or fine arts with delicate details using a tripod. However, it can also be used in situations where moving subjects are included in the scene, by switching the sub-mode.

The LUMIX S5 integrates the Body I.S. (Image Stabiliser) for powerful handshake correction. Panasonic developed an algorithm that precisely calculates shake information acquired not only from the gyrosensor, but also from the image sensor and accelerometer sensor. This enables more accurate shake detection and compensation, making it possible to use a 5-stop slower shutter speed*2. Combining the Body I.S. (5-axis) in the camera and the O.I.S. (Optical Image Stabiliser, 2-axis) in the LUMIX S Series lens the 5-axis Dual I.S.2 compensates for blurring, allowing the use of a 6.5-stop slower shutter speed*3.

It is highly beneficial in telephoto shots and in adverse situations, such as in low-light or one-handed shooting. The 5-axis Dual I.S.2 works for both photo and video recording, including 4K. The Body I.S. compensates for camera movement even when other L-Mount lenses without O.I.S. are used.

With the Live View Composite function, the camera releases the shutter at designated intervals of exposure time and synthesizes the parts with high luminosity to produce a single picture. While the total brightness of each consecutive image is accumulated in bulb shooting, only the target subject and the bright parts of an image are detected and the user can synthesize them carefully while seeing it in live view. This is useful for capturing shots of fireworks or stars in the night sky where the background needs no gain-increase.

*2 Based on the CIPA standard [Yaw/Pitch direction: focusing distance f=60mm when S-R2060 is used.

*3 Based on the CIPA standard [Yaw/Pitch direction: focusing distance f=200mm when S-E70200 is used. Firmware must be updated to the latest version.

The LUMIX S5 possesses improved high-speed, high-precision AF in both photo shooting and video recording. Combining the Contrast AF with DFD (Depth From Defocus) technology, it focuses on the target in approximately 0.08 sec*1. As a camera that excels in low-light shooting, the LUMIX S5 boasts -6EV*2 luminance detection performance with Low Light AF thanks to the higher sensitivity and optimized tuning of the sensor. With 480fps max communication speed between the sensor and the lens, users can take full advantage of this high-speed, high-precision AF when a LUMIX S Series lens is used.

The LUMIX S5 also incorporates advanced deep learning technology that detects specific subjects – humans and fast-moving animals, including dogs, cats and birds. Notably for humans, in addition to the eyes, face, and body, the head is also separately recognised by real-time detection technology to provide even more precise focusing. The camera keeps tracking the subject even if they move quickly, turn their back to the camera, tilt their head or move far away. In addition, improvements to DFD technology have enhanced AFC, which enables users to keep tracking small or fast-moving subjects to capture them in crisp focus whenever the shutter is released.

The compact LUMIX S5 boasts outstanding mobility while still achieving exceptional performance. To withstand heavy field use, the LUMIX S5 is composed of a magnesium alloy full die-cast body and is splash/dust-resistant*1. With an optimum layout of heat dispersion components, heat is effectively transferred outside which results in stable, continuous video recording for long periods.

The LUMIX S5 has a large LVF (Live View Finder) with a high magnification ratio of approx. 0.74x, as well as a high-precision, high-speed OLED (Organic Light-Emitting Diode) display which features a 2,360K-dot high resolution. Adoption of OLED for the LVF achieves high-speed response with minimum time lag of less than 0.005 sec. With an eyepoint of approximately 20 mm, it offers high visibility with comfort for users wearing glasses.

A 3.0-inch free-angle LCD in 3:2 aspect with 1,840K-dot high resolution provides touch control. Composition during recording in various popular aspect ratios such as 16:9, 4:3, 1:1, 4:5, 5:4 and 9:16 can be checked with the Frame Marker function. A REC Frame Indicator identifies whether the camera is recording or not.

The LUMIX S5 has a double SD Memory Card slot – one slot complies with UHS-I and the other with the high-speed, high-capacity UHS-II (Video Class 90).

The camera’s battery can be recharged either via AC or USB according to the user’s convenience.

Compatibility with Bluetooth 4.2 (called BLE: Bluetooth Low Energy) enables constant connection with a smartphone/tablet with minimum power consumption. The settings of a LUMIX S5 camera can also be copied and transmitted wirelessly to other S5 cameras when using multiple S5 camera. Also, Wi-Fi 5-GHz (IEEE802.11ac)*2 is effective in addition to 2.4-GHz (IEEE802.11b/g/n.) This provides secure and stable connection on location for smooth remote control and high-speed data transfer.

*1 Dust and Splash Resistant does not guarantee that damage will not occur if this lens is subjected to direct contact with dust and water.

*2 5GHz Wi-Fi is not available in some countries. 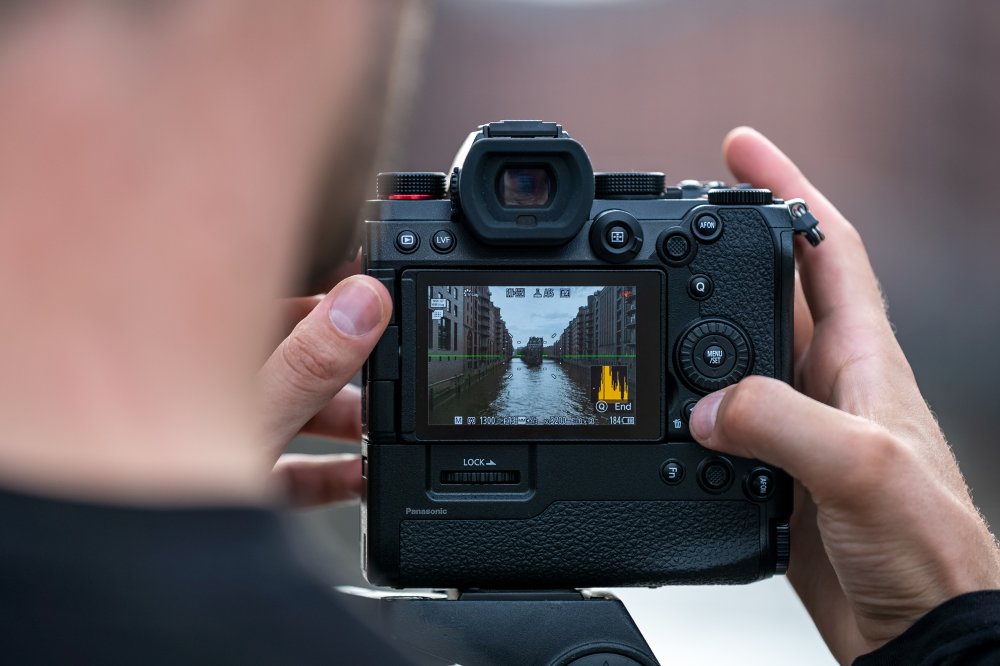 A variety of accessories can be used for the LUMIX S5 to enhance its usability and convenience. Microphone Adaptor DMW-XLR1 is a plug-in type adaptor for an XLR microphone to record high-quality stereo sound. It is ideal for lip-sync recording and has dedicated switches to allow direct, quick control. MIC, LINE and CONDENSER MICROPHONES are switchable.

The LUMIX Tether application software enables tethered shooting via USB. Users can control the camera by connecting it to a PC via USB and view the image on a large PC screen while shooting. For live streaming, LUMIX Tether for Streaming (Beta) with LIVE VIEW mode can be used.

The LUMIX Sync application for iOS/Android devices enables photo transmission to a smartphone or a tablet via easy wireless connection. It also allows remote control of the camera using these devices.

You’ll find more images and full specifications in the EQDB.