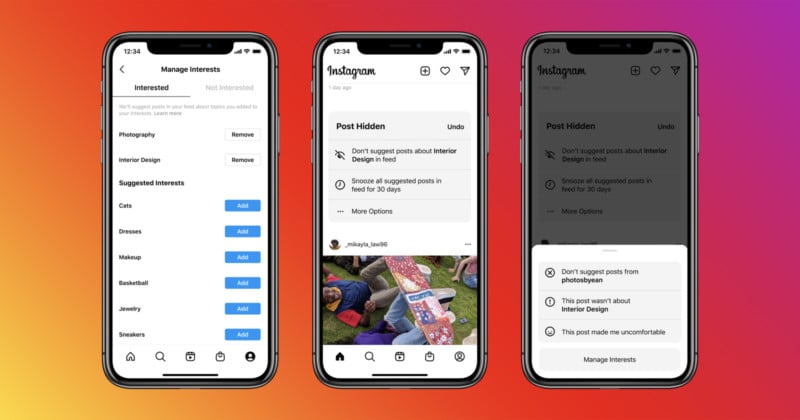 Instagram is reportedly testing a feature with a “small number” of users where its “suggested posts” feature will expand beyond just when you’ve reached the end of your feed and will be mixed throughout a browsing experience, possibly coming ahead of posts from those users follow.

In a confirmation to The Verge, Instagram says that reception to the “suggested posts” feature was so positive that the company decided to try and mix those suggestions in with the average viewing experience, sometimes ahead of photos and videos from people a user explicitly follows.

Additionally, Instagram is testing new controls that will allow users to add a specific topic of interest for suggested posts as well as the ability to “snooze” the recommendations for 30 days or hide them from a feed entirely. “Suggested posts” is a feature that Instagram added last year, but prior to this small test was only ever seen after a user saw everything from all people they followed that was shared.

This shift would make Instagram theoretically function similarly to how YouTube manages its “home” page, which highlights content that is a mix of videos made by those a user is subscribed to as well as videos that YouTube’s algorithm thinks are of interest. YouTube leans so heavily on this analytics-forward approach that subscriptions have fallen in importance over the years. 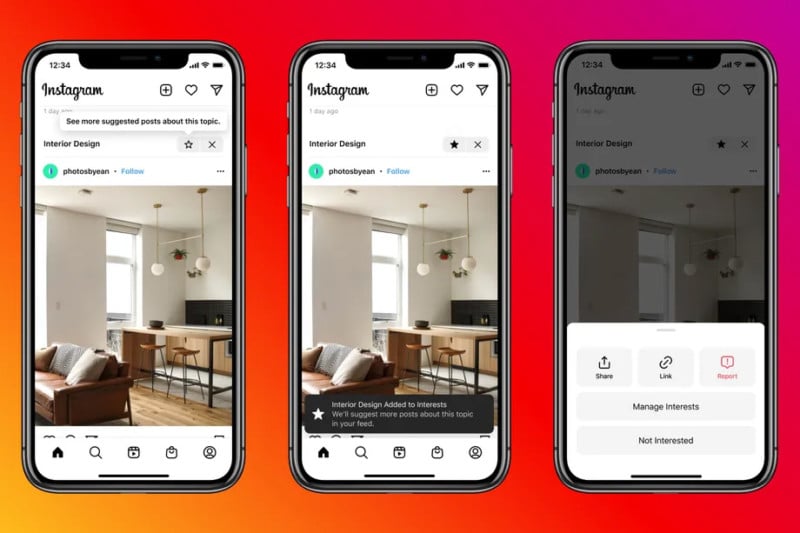 If Instagram were to adopt placing suggested posts for all users, it may have a dramatic impact on how the social network functions. Instagram has a vested interest in keeping users on the platform for as long as possible, and keep them coming back. As such, the social network should not necessarily need to put as much value on showing a user content from people they follow as opposed to delivering photos and videos that keep them engaged. As YouTube has shown, just because a person subscribes to a Channel doesn’t mean that the user necessarily wants to see all content that Channel produces.

That’s the theory, anyway, and it might have ramifications in the long term for content creators who rely on Instagram to reach an audience, especially if suggested posts become more popular and show higher engagement than that of specifically followed accounts.

Algorithm-focused approaches have generally superseded ones that focus on giving users complete control over what they see. Facebook and Instagram both ditched a timeline-based approach years ago, and Twitter defaults users to the “Home” view instead of “Latest Tweets” which uses an algorithm to determine the most interesting content. At least in Twitter’s case, switching back to Latest Tweets is an option.

Instagram did not specify how many people its “suggested posts” test would affect nor how long it intended to test the feature. 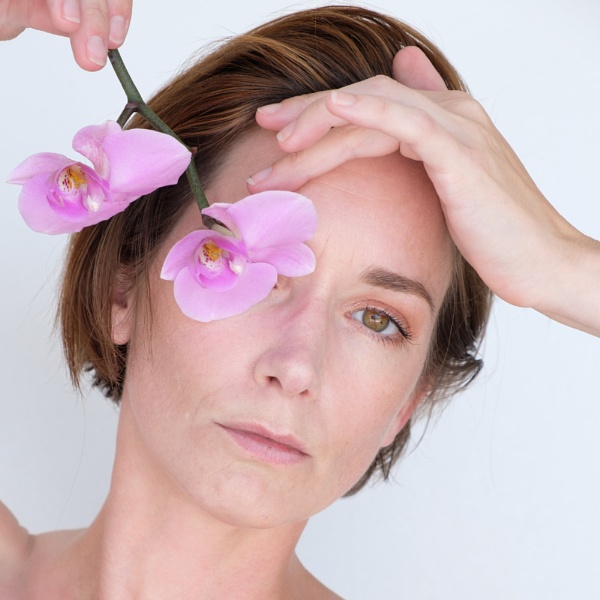 As we all  or almost all  start to get out and about a bit more, at least for the moment, it would be possible to separate family events (in my case, a small family party to celebrate Fathers Day 48 hours early) from picture taking. Were doing both more, but are we mixing them?

Mrs D suggested blogging about the gathering, and I thought about some pictures I posted on Christmas Day 2012. And when I turned my computer on, the background image was a shot of Mrs Ds Dad, who died in 2009.

The picture of my father-in-law was a very characteristic one, and theres been a lot of family interest in prints, because thats one of the ways that people remember him. A good portrait can happen when posed, but very often its unposed images that capture what people want to remember about someone. 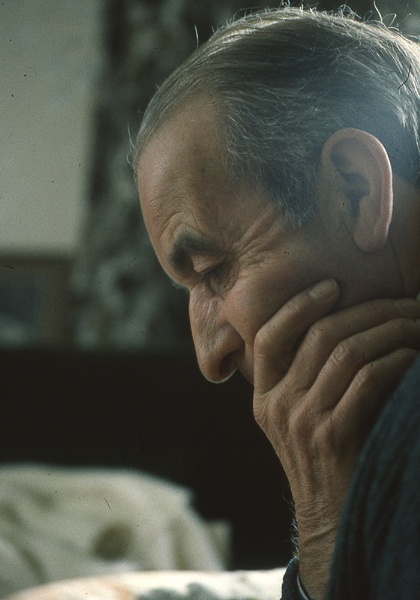 When I posted THIS in 2012, there was something that I (and all my friends in the pictures) knew, but that I didnt write. One of the group was terminally ill, and we had got together specifically because it was likely to be the last time we could do so. Because of that, I made a special effort to take pictures. Not a lot of them, with a DSLR, but enough: we were relaxed and it was easy to get images that seem to me to show people as I know them.

Most of the time, though, we dont get notice of forthcoming death So theres no sharp, immediate incentive to take pictures for posterity and remembrance. I didnt know, when I did a remote shoot with Stephanie Dubois in May, that I would be one of the last few photographers she worked with.

Sorry  this is gloomy, but theres a point. And that point is that as you gather with friends and family, it will be a really good thing if you take some pictures. Dont make everyone line up (though if someone else suggests it, it should definitely be done!), and dont hold everything up for half an hour while you fiddle with settings. But get some shots, and let someone else take pictures of you (Dave, please note! I know you think youre allergic to cameras, but youre not really.)

If the very worst happens, there will be a treasure beyond price (and make sure that prints are done) Otherwise, there will be something that everyone can enjoy while the subject is still around to appreciate the love and happiness. And if you have to use a new camera or lens or filter as an excuse (as I did for the shot of my daughter opening a card with a popup giraffe), so be it. Just make sure that you have mastered the controls before you point the camera at the family 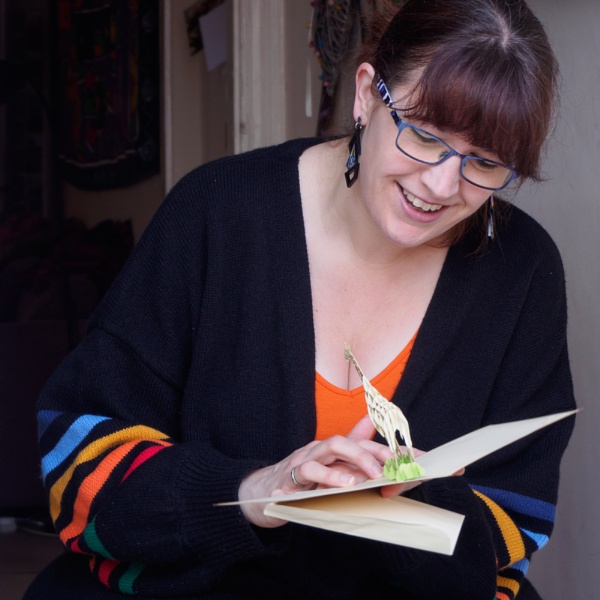 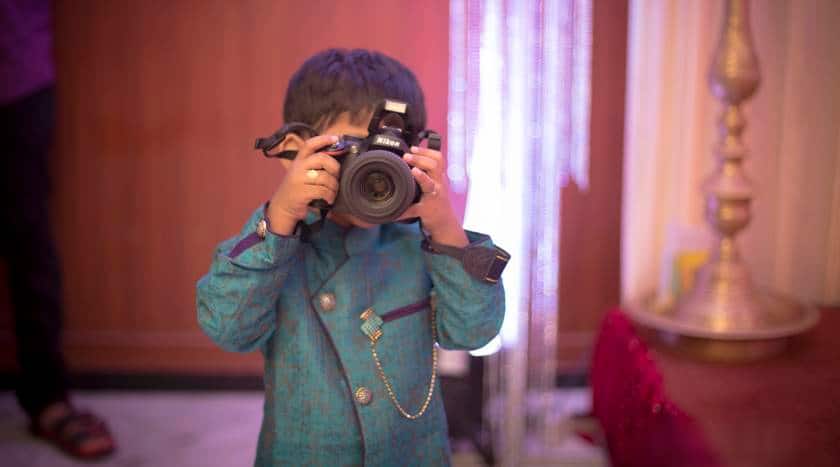 In the last five years, we have experienced a paradigm shift in the photography industry. From print to screen (digital), From DSLR to mirror-less, from complex to compact, traditional to contemporary. Technology has enabled enthusiasts and amateurs to take great pictures and the trend of candid photography at weddings has really taken off. Add the social platforms of Facebook and Instagram, have made it simpler to share those cherished moments of your friend’s big day, without having to wait for the professional bulky album.

These days, friends and family members weilding DSLRs are ubiquitious at weddings. And who will wait for the official photos to come in when the scores of friends and followers on Facebook/Twitter/Instagram are simply waiting for updates. But nowadays these photos have gone beyond just another share on your timeline to being an important part of the wedding album.

So, the next time you’re going over to shoot your friend’s/relative’s wedding, you may want to be better prepared for those gorgeous shots that will have everyone talking. Irrespective of what gear you use — could be a smartphone or a DSLR — here are top 12 tips you must keep in mind for clicking some excellent shots.