It’s not often we hear about new innovations in the realm of darkroom printing, but Ilford Photo gave DIYers everywhere something to be excited about this week, with the announcement of the new ‘Pop-Up Darkroom.’

The Pop-Up Darkroom is exactly what it sounds like: a tall, light-proof tent designed to make home film developing and printing more accessible to analog photographers. It will ship later this year for roughly $265.

Here’s what you need to know.

Who’s the Pop-Up Darkroom for?

Developing film at home can be a challenge. The process of transferring frames from film spool to developing reel is especially difficult. If you don’t have a dedicated darkroom (which, hello, most of us don’t), this often takes place in a light-tight ‘changing bag.’

To execute the film loading process blindly and with one’s hands in a bag requires patience, practice, and skill (especially when working with medium format). Fortunately, once your frames are on the reel and in the light-tight developing tank, the rest of the process is daylight-friendly.

But this obviously isn’t the case when making photographic prints from negatives—you’ll need an entire light-tight space with room for both a film enlarger and trays of chemicals. Unfortunately, for most folks, permanently converting a space in their home into a darkroom is just not feasible.

Ilford’s new product allows you to set up a darkroom in virtually any room in your house, or even outside (just be sure to secure it from wind gusts). When assembled, the durable light-proof tent hangs on a 2.2m (~7.2ft) tall frame to give you a 1.3m x 1.3m (~4.25ft x ~4.25ft) working area you can use standing or sitting. It’s designed to fit in most North American, European, and Asian homes, which all have an average ceiling height of between 8 and 9-feet.

A built-in air escape at the bottom allows you to use a fan for ventilation. There’s also a smaller vent closer to the top that you can attach air extraction tubes to. Developing chemicals can be pretty potent (unless you’re using beer), so it’s probably a good idea to at least consider some sort of ventilation solution when hanging out in there.

Why develop and/or print film at home?

Developing your own film, particularly in black-and-white, is quite easy (with the exception of loading the reels!). Plus, the process gives you more options and creative control than you might find at a lab. It can also help you save quite a bit of money in the long run. And printing B&W photos at home is a fun, hands-on process that results in a tangible, one-of-a-kind output.

When is the Pop-Up Darkroom available?

The Pop-Up Darkroom goes on sale in November. Digital Camera World reports that it will retail for around $265, although Ilford hasn’t confirmed that price just yet.

To coincide with the release, Ilford has also announced a Darkroom Starter Kit, made in collaboration with Paterson. It will include everything you need to start developing film in your Pop-Up Darkroom; it will retail for around $150. 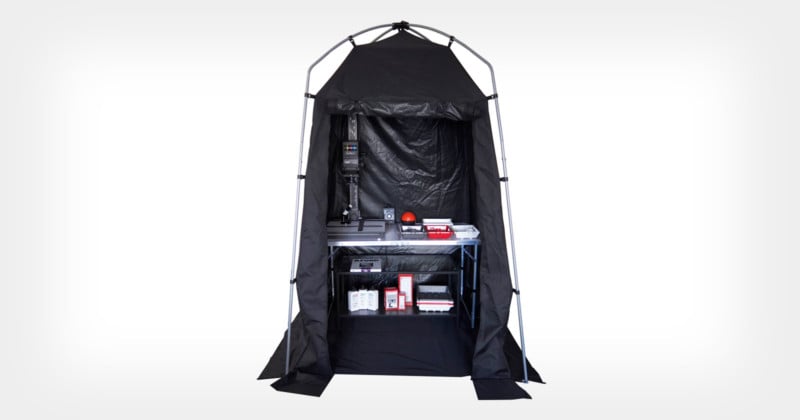 Ilford Photo has announced a new Pop-Up Darkroom that gives film photographers the opportunity to develop their prints on-the-go or in any indoor space without needing to convert it.

Ilford, the United Kingdom-based photographic film, paper, and chemicals manufacturer, is a well-known name in the analog photography world. At the start of the year, the company, which was founded in 1879, invited interested photographers to go on a virtual tour and see what its factory looks like today and how the film manufacturer operates. It also employs a modern approach and shares insightful and educational film photography videos that are accessible for everyone on the company’s YouTube channel.

The company’s latest product, the Pop-Up Darkroom, supports Ilford’s goal “of encouraging and enabling film photographers to take the next step in their analog journey and experience the creativity and magic of darkroom printing.” 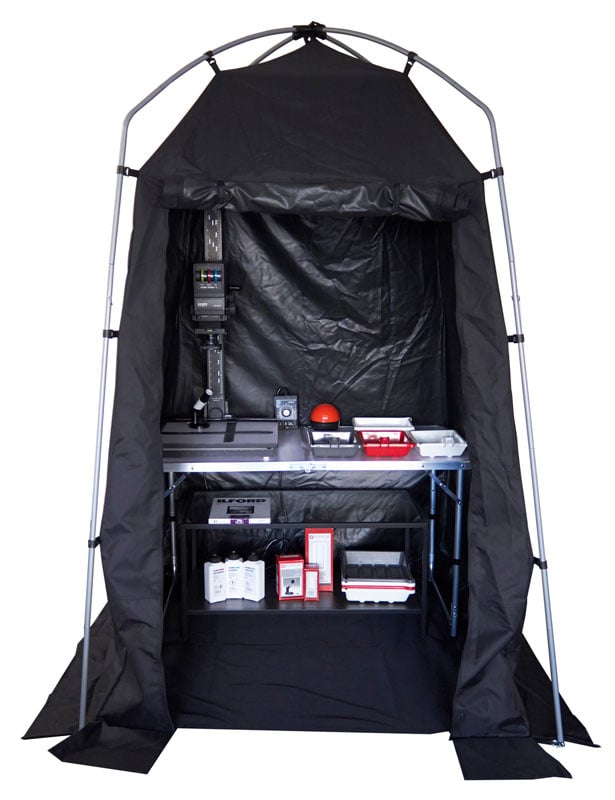 The Pop-Up Darkroom has been created for film photographers who want to print their negatives but who may struggle to convert their existing spaces into suitable darkrooms. Not everyone has the space for a large darkroom or the tools to modify an existing tent into a darkroom. Ilford designed its pop-up darkroom to fit indoors, based on most standard ceiling height rooms in American, European, and Asian homes.

When erected, the darkroom stands approximately 7.2 feet (2.2m) tall and still affords a workable 4.3×4.3-foot (1.3×1.3m) space to process and print while the user is seated or standing. It has a built-in air vent that allows users to add an optional fan or air blower, and a smaller vent is included closer to the top of the darkroom to attach air extraction tubes. 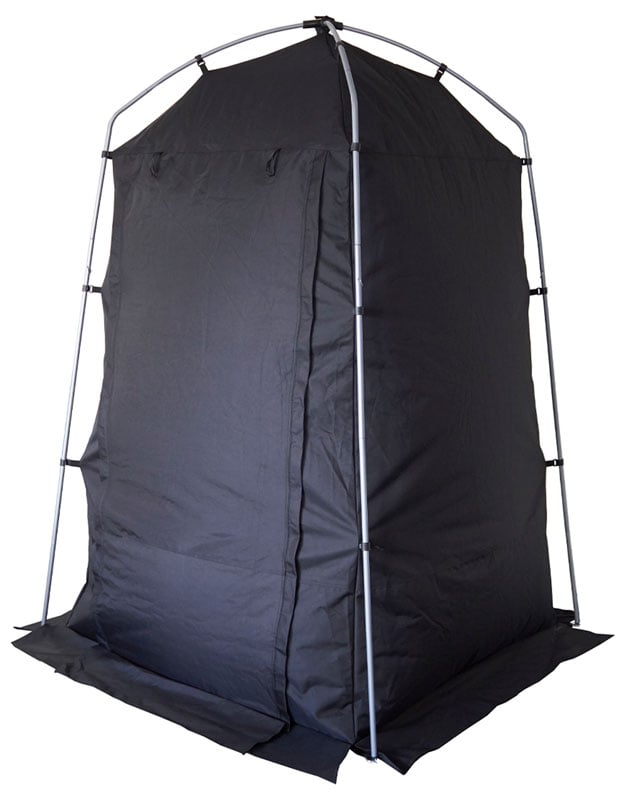 The darkroom has a durable light-tight black material that clips to the frame in addition to an accompanying ground mat which adds extra protection for the flooring and can also be fastened to the darkroom material. It also has a material loop at the top to allows photographers hand a safelight.

For easy storage and transportation, the darkroom can be easily folded down using the included carry case.

The Ilford Pop-Up Darkroom will hit store shelves in the final quarter of 2021. Pricing has yet to be announced, but Digital Camera World is hearing that it will carry a price tag of around $265. Over the past seven months, Ilford has been publishing a set of helpful “Darkroom Guides” to the How To playlist on the company YouTube channel. The series was created to help film photographers take their “next steps in your black and white darkroom printing journey.” If that describes you, then this is one you’ll want to bookmark.

There’s a lot of information out there about film photography—including some exceptional websites like EMULSIVE that are exclusively dedicated to film lovers—but if you’re looking for “how to” advice, one great place to start is right at the source. Ilford’s channel is filled with great behind the scenes videos, how to videos, and some fascinating photo stories besides.

This particular series features Rachel Brewster-Wright—the owner of Little Vintage Photography—who uses each episode to walk you though one key darkroom technique. The series begins with an introduction to Dodge and Burn and moves on to more advanced techniques as the episodes roll on. By episode four, you’re learning how to use multigrade filters to take your printing to the next level.

There are currently four episodes live, which you can see for yourself below:

We hope to see more videos with Brewster in the coming months. In the meantime, if you enjoyed this then definitely check out Ilford’s full “How To” playlist for lots more tips and tutorials on shooting, developing, and printing your film photography.

Ilford says the warehouse will remain open to ship existing products to customers, distributors, and online retailers. The company also suggests that, in recent weeks, it was increasing the production of the most popular products—anticipating that they might have to shut down. While Ilford’s warehouse is well-stocked, customers should expect delays in shipping time—if there is an Ilford product that you regularly use, now might be the time to restock.