This week our Sunday walk was through Milton village to Milton Country park. 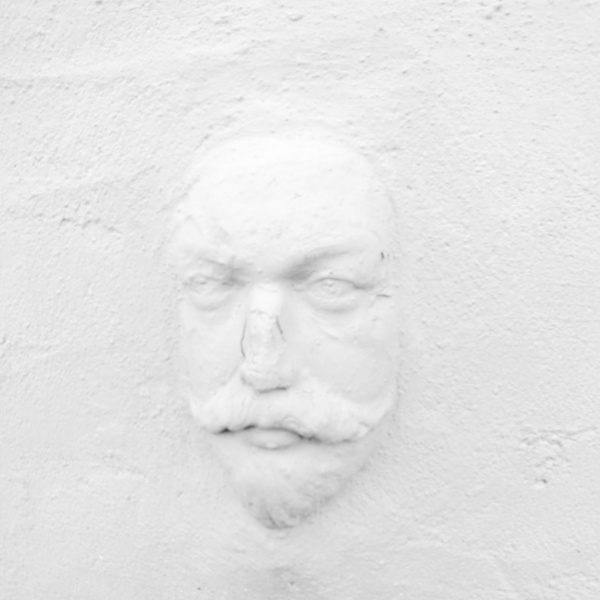 I did not expect to be writing anything this week, as we had our granddaughter staying with us for the weekend. So, it was very much a case of snatching photos for this blog, as and when I could, in between pushing swings; saving fellow pedestrians from a five year old on a bike who thought she was in the Tour de France; and taking photographs for the the family album.

One problem I thought I might have, was switching my Panasonic TZ70 between the normal aperture priority, colour, four by three mode and ‘dynamic monochrome’ square image mode. In the event, this was not a problem – just a quick turn on the mode wheel did the trick.

What was more of a problem, was switching thinking. For instance, I routinely expose to the right as far as I dare. For this blog, using images straight out of the camera, exposure has to be balanced. Inattention to this, resulted in my first picture being far more high key than I would like. But to be fair, I would not have noticed this relief in the plaster, had I not been bending down to the granddaughter as it is only about three feet above the ground. The relief is on the exterior plaster work on the seventeenth century Queen Anne’s Lodge in Milton village. 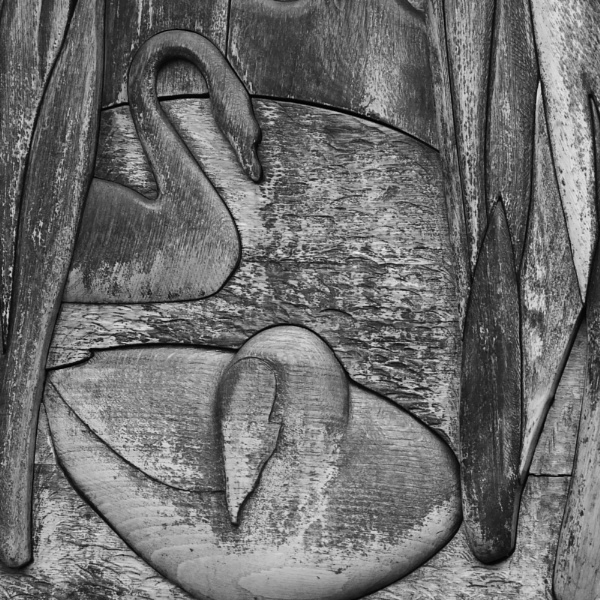 This next image is a close up of the carving on a new wooden sculpture at the main entrance to the park. First impressions, are that the sculpture offers lots of opportunity for abstract close ups, which I will investigate on a less pressurised day. 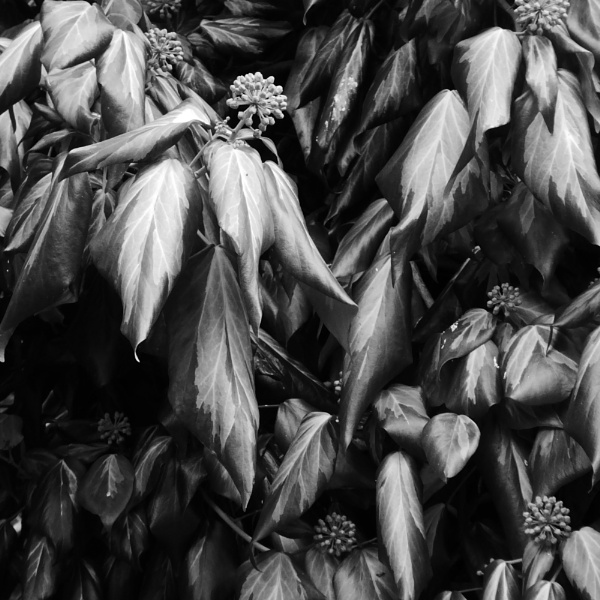 If I was dissatisfied with the exposure of my first image, I was really happy with the tones in this third image of variegated ivy. I would have thought I had done well with this result if I had converted from a raw photograph. 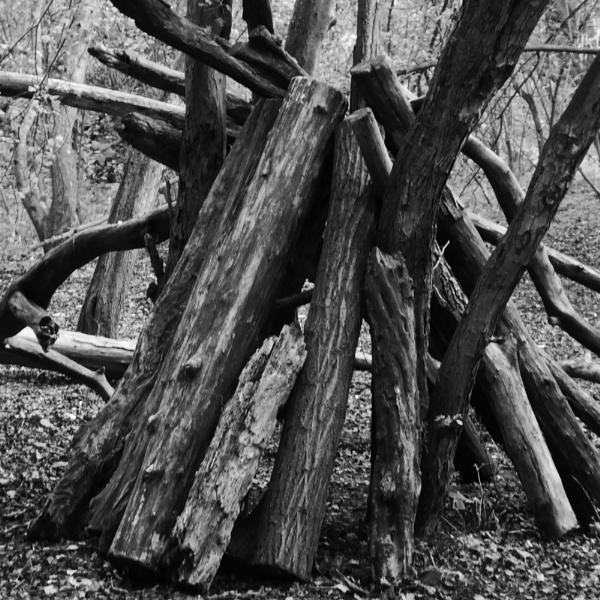 Similarly, I have tried many times to photograph the dens which are now such a feature of our woodlands. They tend to be in various states of disrepair and always look interesting. But I have always found it difficult to get a good separation between the den and its background which is invariably cluttered. I think that that separation has been achieved rather well in this image, and as such it probably represents one of my best attempts at capturing this subject. 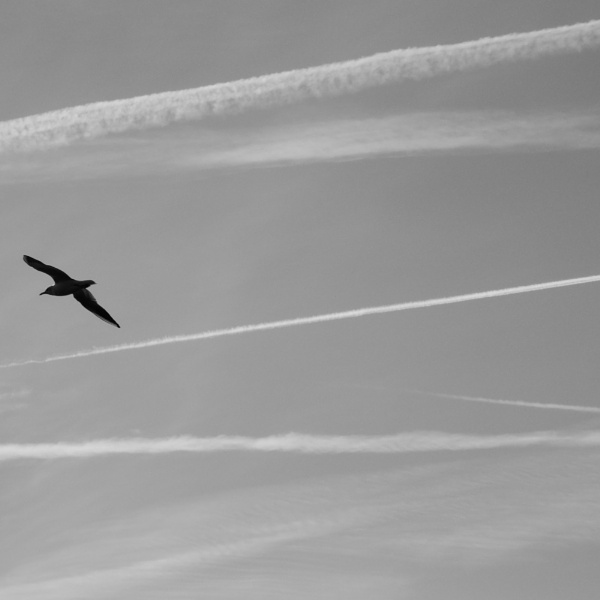 Finally, when I set out on Sunday, I thought that I could photograph some birds. Milton Country Park consists of disused gravel pits filled with water which support a fair population of birds. But the swans stayed resolutely in the middle of the pits, and buried their heads in the water. The ducks which normally come swimming up to investigate any ball I throw in for the dog to fetch, uncharacteristically scattered at the mere sight of the family pet. There was no sign of the herons, grebes and kingfishers. So, I tried taking pictures of gulls in flight. This was about the best.

The TZ70 is not the fastest camera for focusing, and by the time the AF had locked in, the bird had long since gone. I am amazed that the bird is as sharp as it is, but the camera probably focused on the clouds, which were a sufficient distance away to give the required depth of field.

I think I must have had quite a lot of beginner’s luck last week, because, this Sunday, I really struggled with the challenge I have set myself: square, black and white images, straight out of camera. Producing images straight out of camera is rather cruelly exposing my lack of expertise, and how much I rely on post processing to create good images. So despite taking more images, I still only finished with six that I am in the least bit confident of making public. 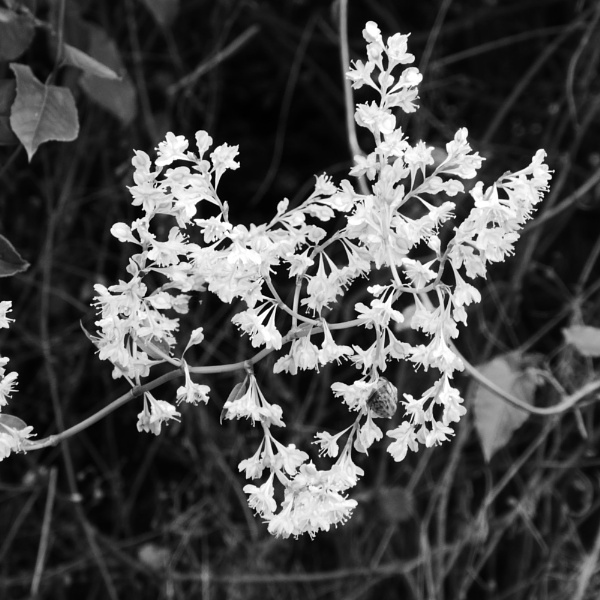 The pick for me was this flower. I don’t know what it is and cannot find it in any of my books of wild flowers, so I suspect it may be an escapee. Its a subject that fits the square format well, and the only post processing I would normally do is lose the additional white flowers on the left hand side.

It is strange using a square format. If I come across a subject that is clearly upright, I still rotate the camera, which with a square frame makes no difference at all! This has meant that at times, I simply could not get a good composition without cropping, which for the purposes of this blog I have renounced. But, by and large, I have found I have been using my feet far more often and getting a much tighter crop in camera than I would have done in the past. 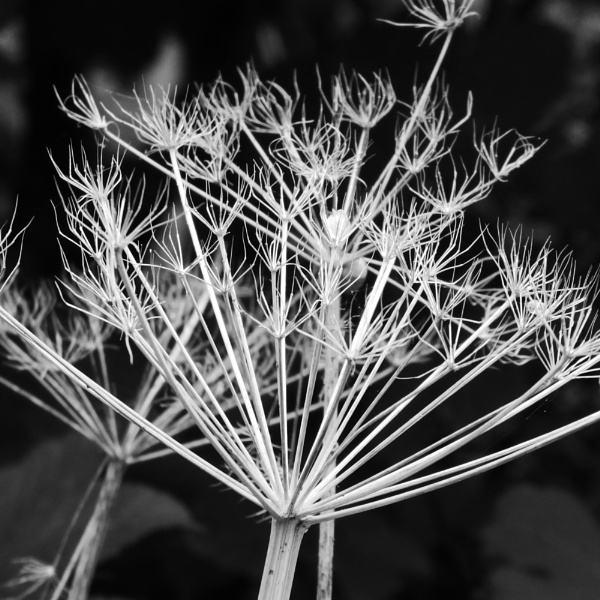 Unfortunately, I could not get any closer to these cow parsley seed heads, because of a ditch and bramble bushes. Ideally, I would have done some gardening and got rid of the second seed head in the background. Alternatively, of course, I could have removed it in Photoshop. That is a pity, because I like the basic image. 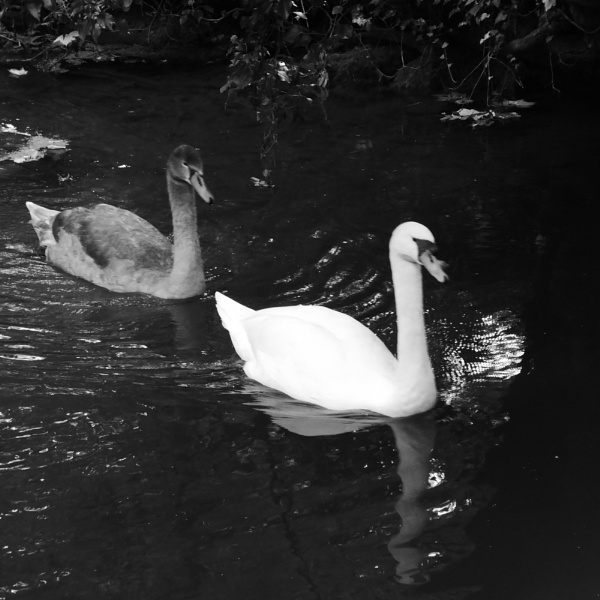 Without post processing, I have way of mitigating extreme contrast. The swan swimming down the river could certainly do with attention to the shadows and highlights. 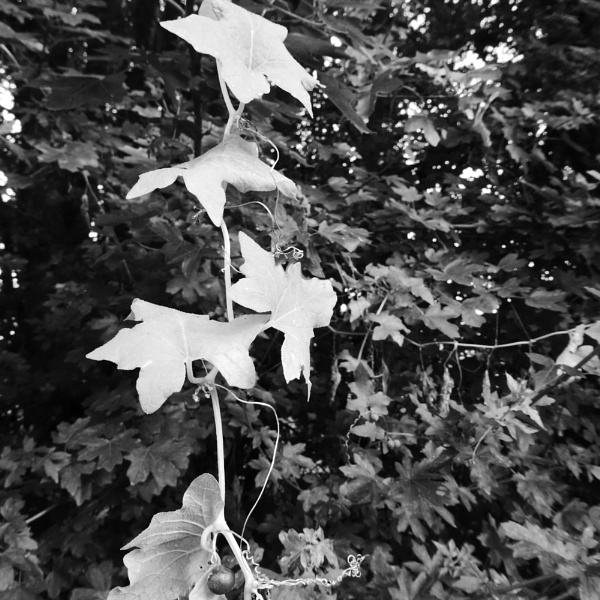 I find shooting monochrome is a great help in getting a good composition – it brings out the fundamental architecture of an image, which can be obscured by colours. Also in taking photographs in a green English countryside, the whole image is defined by luminosity and not colour, like this picture of bryony. A lot of the bryony I spotted was a necklace of red berries weaving through the hawthorn hedges, but without filters (which I haven’t got) they come out almost exactly the same shade of grey as the surrounding leaves and were completely lost. 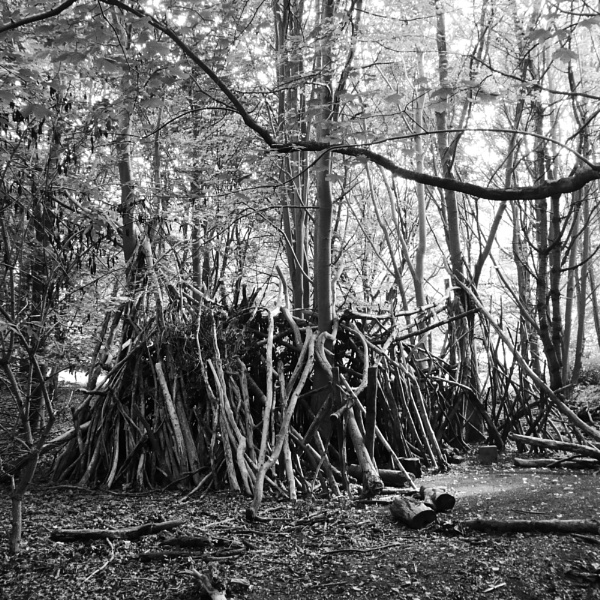 The wood I walked through is on National Trust land, and has proved a prime location for den making. This particular one is one of the larger ones, and stands out well against the backlit foliage of the trees. Again, post processing, I would have cloned out the long horizontal branch. 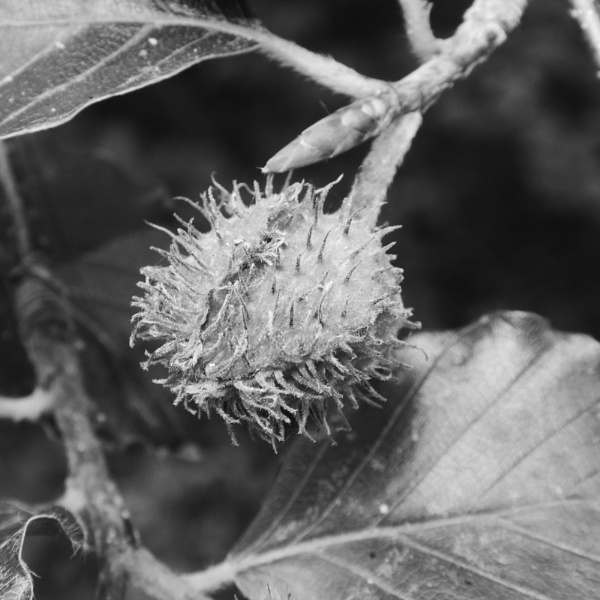 Finally is this beech nut, which almost certainly would be better in colour. As a monochrome image, it needs work doing on the tonality. I would also clone out the bright spot in the top right, and work on the clarity and texture of the nut itself.

I have set myself a challenge: to take photographs on our Sunday morning dog walk and post them on this blog straight out of camera. I have a sort of half idea that I would like to use a film camera, but I not sure how good any of my photographs would be without RawTherapee and Photoshop. So this posting SOOC could quickly prove to be a bad idea. We’ll see.

One of things I am aware of is that almost all the images I post are cropped, and often radically – which points to sloppy composition and/or not getting close enough. So for this mornings walk, I set the aspect ratio on my camera to square. And to add to the challenge, to take monochrome images as well. So with monochrome square images, I am well out of my comfort zone.

So here are the most promising six images from this morning:

Starting off with a pretty view alongside the lode. 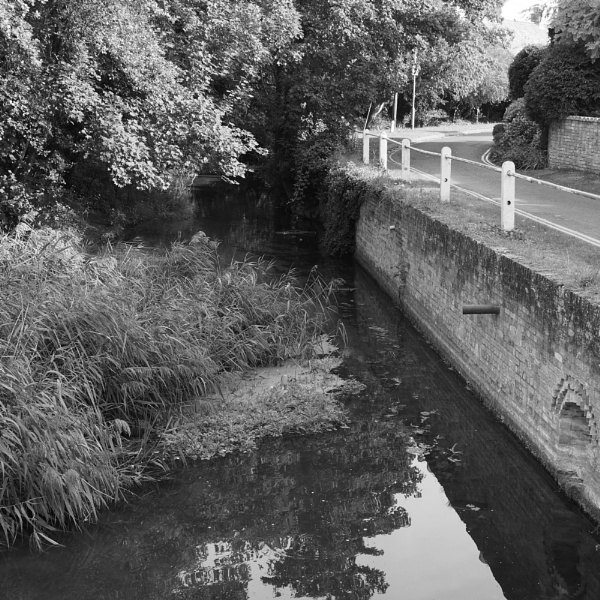 Then came across this comma sitting on some brambles. I have never taken a monochrome image of a butterfly before. I am quite pleased with this, and may well see what I can do with further processing. Certainly one of my favourites from this morning. 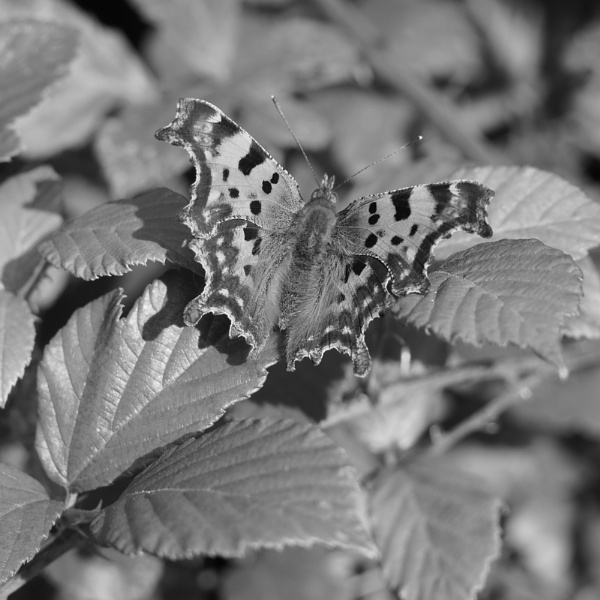 Mayweed growing on a field margin. Nice and dramatic. 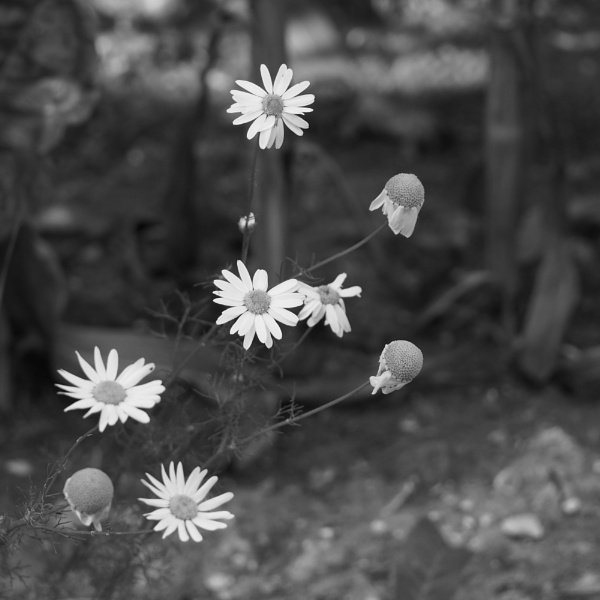 Equally dramatic is this meadowsweet on the bankside. Probably another image I will process further. 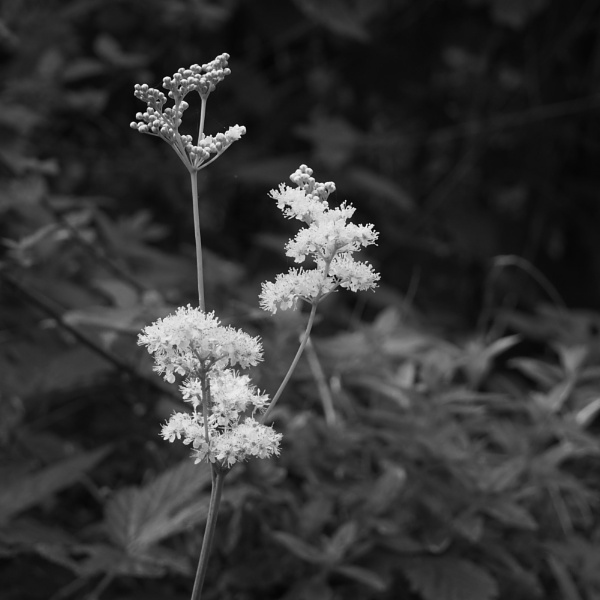 For years, I have been taking images in a series I think of as ‘touched by light’, which is really about sunlight playing in the woods and in the undergrowth. 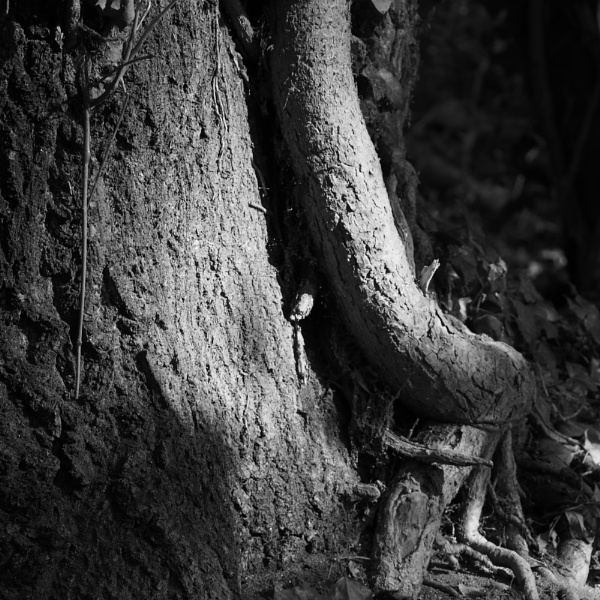 And finally a view into the woods. This one probably should be in colour as the light area on the ground are actually light brown beech leaves that have fallen off. 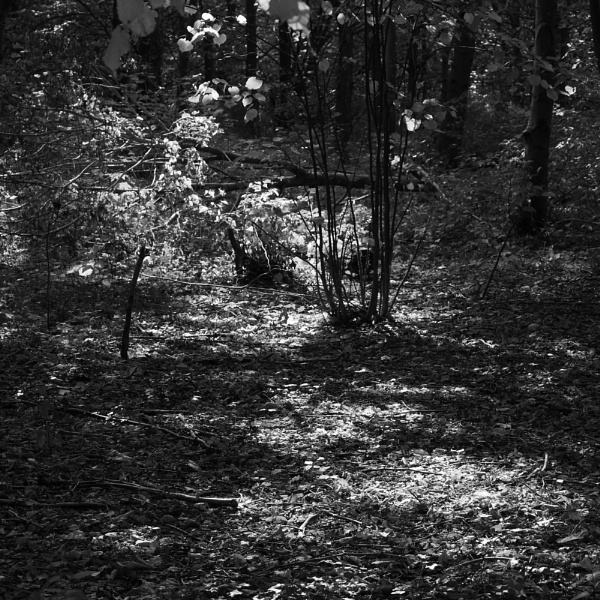 Thanks to all of you who have taken the time to read this. I would ask one favour. If you feel that the images I am showing are not to the standard you would expect on this site, and my publishing SOOC photos can be categorised as ‘seemed like a good idea at the time’, please let me know, so I can save myself any further embarassment.